Amazon’s continued encroachment into the apparel retail space will step up a gear in 2018, with traditional department stores facing their gravest threat yet.

Big is about to get much bigger. In the past 12 months, Amazon has become the largest apparel retailer in the US, with sales of almost US$30bn in 2017. Impressive for sure, but the worrying news for its rivals is that this relentlessly ambitious company is only just getting started.

Time was when Amazon’s online apparel offering looked confused and unorganised; an afterthought almost. Those who have shopped for clothing with Amazon in the past 18 months will know that picture is changing fast. Indeed, it is easy to see why Cowen the investment bankers has projected that over the next five years Amazon will more than double its US apparel market share from 6.6 to 16 per cent. We can be sure to expect some collateral damage in Amazon’s wake.

Innovation is key for Amazon. To bolster market share and push more apparel sales online, the business has begun to pursue a range of strategies. First and foremost is the work the business has done in terms of establishing partnerships with apparel brands, encouraging them to use its e-commerce platform.

Brands are stuck between a rock and a hard place here, finding themselves in the unsettling position of having no real option but to work with Amazon – even if that effectively means collaborating with a serious rival.

Last year, Nike began selling its products directly on Amazon having previously appeared reluctant to do so. Nike felt it could no longer afford to be absent from the Amazon channel, Amazon’s combination of distribution, delivery and industry leading platform having established the kind of huge army of prime, loyal customers which rivals could only look on at in envy. Nike needs to be in the Amazon space or risk losing brand visibility. Other brands will doubtless continue to follow suit.

There is more though. As well as getting brands on board, Amazon is also disrupting the apparel space by launching services that make it easier to shop online. Last year it launched Prime Wardrobe, which lets customers try on clothing before buying it. Customers can order numerous items and send back any clothing they don’t want. If a customer keeps at least three items they receive a ten per cent discount from their total purchase, while keeping five items leads to a 20 per cent discount. Shipping is free, and returns can be left by a customer’s front door.

Innovations such as this are light years away from what we have come to expect in the apparel retail space which, let’s face it, has been painfully slow at getting to grips with the digital experience for customers. Why has it been taken the entrance of Amazon to come up with innovations like Prime Wardrobe? A question for another day, perhaps.

As well as Prime Wardrobe, we have also seen the launch by Amazon of its own athleisure brand and the release of a camera style assistant called Echo Look. With more innovations to follow, Amazon will become an even bigger threat moving forwards to department stores such as Macy’s – which Amazon replaced as the largest apparel retailer in the US – Nordstrom, and JCPenney. 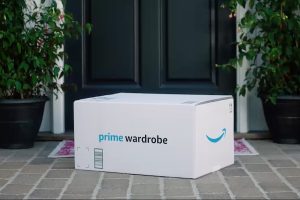 There is further research illustrating the threat posed by Amazon. In late 2017, Morgan Stanley released the results of its third annual AlphaWise apparel survey, which showed – to no great surprise – that Amazon is rapidly taking share in the apparel space, hurting department stores as well as specialty retailers.

There are several striking takeaways from the survey. Firstly Amazon, with 61 per cent, has by far the highest net promoter score (NPS), more than double Target, the runner up at 28 per cent, and a staggering nine times the average score of other retailers. An NPS is a management tool used to gauge the loyalty of a business’s customer relationships

The research also found that Amazon, Zara, and Wal-Mart (WMT) were winners in terms of consumer intent to purchase over the next 12 months, although off-price retailers TJX Cos and Ross Stores were at the top of the list. Alarmingly, Urban Outfitter’s Anthropologie, Aeropostale, Abercrombie & Fitch, and Gap’s Banana Republic all registered net purchase intention declines.

In the research, Amazon showed a 10 per cent year-over-year increase in apparel shopping incidence, a remarkable rise. The survey showed 69 per cent of people bought apparel at Amazon over the last six months, up from 59 per cent the previous year.

In terms of apparel price perception, Wal-Mart and the off-price retailers were ranked highest, although Wal-Mart came out on top with 73 per cent of respondents listing it as having the lowest clothing prices.

Finally, looking at stocks that have an overlap with Amazon, the report found that department stores continue to look particularly at risk, with 79 per cent of their shoppers also buying Amazon apparel in the last six months. Nordstrom and Macy’s showed above average risk, with 84 per cent and 81 per cent overlap, respectively.

It is difficult to find any real crumbs of comfort for traditional apparel department stores as far as the Amazon story is concerned. The feeling among the industry insiders I’ve spoken to on this issue is that bricks and mortar retailers have been way too slow to innovate in the wake of Amazon’s threat, and are consequently playing catch-up, albeit with decidedly mixed results. ‘Rabbits in the headlights’ would not be unduly harsh a description right now.

Is there anything they can do? Heiner Evanschitzk is co-founder of Aston Centre for Retail Insights and professor of marketing at Aston Business School in the UK. Asked for his thoughts on this issue, he told Apparel Insider: “Amazon and specialist online fashion retailers like ASOS will have a huge impact on traditional high street fashion retailers because they offer huge assortments and hustle free shopping form home.

“[Consequently] high street fashion retailers should change their approach and start competing with online retailers by being a) more personal and b) more inspirational.

This kind of differentiation makes for a compelling argument, and there is certainly work which traditional apparel retailers can do in this area. However, this doesn’t account for the fact that many of us are now happy to do all our clothing shopping online, and no amount of personalised experience will change that fact.

Hence working with Amazon may well be the sensible and pragmatic option – just ask Nike. Gurdev Mattu is a director with Fashion UK. He says: “Although at one time considering Amazon as a competitor to pure fashion brands may have seemed unlikely, the involvement of big names such as Hugo Boss and Daniel Wellington, have helped consumers to start exploring the clothing options they offer.

“However, this does come with a threat to some retailers, mainly offline independents. They have few ways of reaching the same volume of consumers as Amazon does but done cleverly those retailers can embrace the marketplace by placing certain products or brands for sales on Amazon. This will enable them to reach a wider audience and raise awareness for their offline brand.

“The reality is, Amazon will continue to take market share but that doesn’t mean retailers should be threatened. Instead they should embrace the opportunities they present. Amazon buyers are very loyal and tapping into this audience shouldn’t be underestimated. Independent retailers will still have the opportunity to grow their brand and develop their own audience, but by starting with Amazon they will gain an established customer base from the very beginning. Big retailers will also benefit from engaging with Amazon as they will find themselves exposed to a larger audience, and yet still in a position to compete if they can continue to innovate on services (such as same day delivery).”

There’s that word again: innovate. Traditional apparel department stores will need to do much more on this front if they want to survive the Amazon onslaught. But will it be too little too late?